This guide aims to demystify an area that can often be seen as daunting. If you don’t know where to start or maybe weren’t aware that this was your responsibility, then this guide will introduce you to concepts of screen reader UX and how to document this for your component. It’s actually fairly straight forward, and just an extra step to your process. It’s ok to concentrate on the visual user experience first, you’ve got to start somewhere, though always try to keep the screen reader UX in mind.

This guide won’t necessarily teach you how to make your user experience accessible or what best practice might be for your component. This is where accessibility guidelines come into play, such as the BBC Mobile Accessibility Guidelines or WCAG. Consult guidelines as part of your process. And also consider other types of assistive technology users.

Thinking about everything at once can be overwhelming. Let’s focus on the screen reader UX. Using your visual as a starting point, this guide takes you step by step through how to document this for web based content. For native app based content see the iOS and Android guide.

Don't leave it to chance

Using your visual as a starting point, we’ll take you step by step through how to document the screen reader UX introducing concepts along the way. We’ll be using a fictional ‘Share’ component as an example.

Like a visual, you might not get this right the first time, doing this with pencil and paper will save you time. You can then document the results in a digital format afterwards.

So lets start! Grab a pencil or pen if you prefer… Then do one of the following:

Best practice would almost always be to have the same elements for all users. Though sometimes there may be an exception, as user needs in the visual and non-visual UX can vary, the UX should be comparable. Before crossing out an element, question why one user group would have an element and not another. Also keep in mind that you will be hiding this content from other assistive technology, such as speech recognition and reading solutions.

Cross out elements you don't need and label them as hidden elements. They will still form part of the visual user experience. In our example ‘Share’ component, the input field element containing the url of the link is for illustrative purposes, so we’ll cross this out.

Would any additional elements improve the user experience for screen reader users? Any such elements will be rarely needed and should be used sparingly.

Like the previous step, best practice would almost always be to have the same elements for all users. Before adding an extra element, question why one user group would have an element and not another. Also keep in mind that it's easy to forget extra elements are there, as you can’t see them, in a future iteration these elements could be forgotten about and no longer make sense.

Draw on any extra elements, and label them as visually hidden elements, as we don’t want to add them to the visual user experience. In our example, we’ll add a heading element so screen reader users can easily identify and find this content. Don’t forget to consider the context of the component at the page level. A heading element may not be appropriate for all ‘Share’ components.

In what order should a screen reader read through the elements? To illustrate this, add a number next to each element. Always try to make the order of elements match the visual order. A mismatch could lead to confusion for some users, such as a sighted screen reader user. It will also make building the component more complex.

On occasion, there may be times when the desired visual order just can’t give a good experience for a screen reader user. In our example, the ‘X’ close button is visually displayed on the top right as is best practise. It may not provide the best screen reader UX to have this content announced before the other share options. So on this occasion we'll change the content order for screen reader users.

Another example is information that is key to an interaction. In our example, the text “Warning: Not responsible for content on social platforms” is such a case. Inorder for a screen reader user to make an informed decision, this information should be read before the share links. Ideally this warning text should be displayed before the links in the visual too, as this would help other users as well.

In a well designed visual user experience, a sighted user should be able to identify elements and their semantic roles along with any expected behaviours by simply looking at them. For example, when viewing an article, you can usually identify text that has a semantic role of heading because the font size of it is larger than that of surrounding text. For screen reader users you need to convey this in another way, by using meaningful code. This is often referred to as semantic code.

Semantic code defines the roles of elements and relationships between elements, which then conveys the meaning and structure of content to screen reader users. This is usually conveyed to the user alongside the announced content of elements. This also tells the screen reader how elements behave or should be treated.

HTML primarily defines the semantic roles of elements and structure of web content. You don’t need to know how to write the code, however some basic knowledge will be an advantage.

Think about every element in your component and the associated semantic roles for the non-visual user experience. Consider what HTML element is the most appropriate to convey the meaning you had intended from the visual styling. This is referred to as the use of semantic HTML. Strip away the presentation styling and what are you left with? A heading, an image, a link, a button etc.

If your component includes a common design pattern, such as tabs. If available, use a technical guide as a starting point. Such as the BBC GEL technical guide for tabs or WAI-ARIA Authoring Practices tabs design pattern. Reference any used documentation so engineers can follow a best practice accessible implementation. 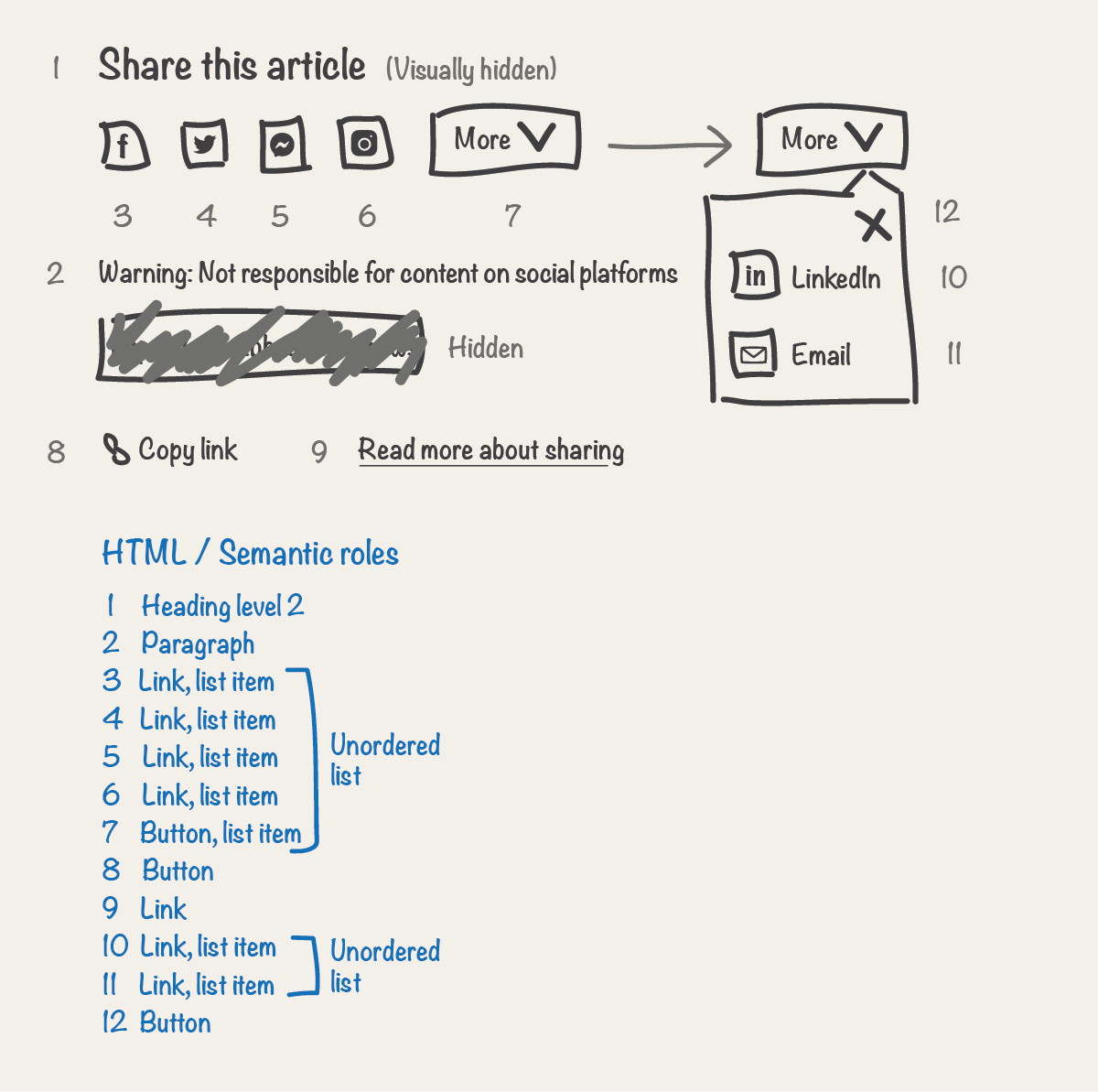 For a comparable experience to that of the visual, you should document the content or text that should be announced for each element. This should include images and icons, in such cases this is often referred to as a textual alternative or alternative text. You have already documented semantics by defining native semantic roles via HTML elements.

You might want to announce extra text content to that of the visual. For example, to provide context, which might be obvious or not relevant in the visual user experience. Extra text is usually referred to as visually hidden text, as it doesn't form part of the visual user experience. An engineer can decide what is the most appropriate way to implement this, usually by applying CSS or an aria-label to elements. Use extra text sparingly and only when absolutely necessary.

Document what content should be announced for each element. In our example, in addition to the text in the visual, we’ll also document extra text for some elements to provide context. Along with the announced content for icons and images. 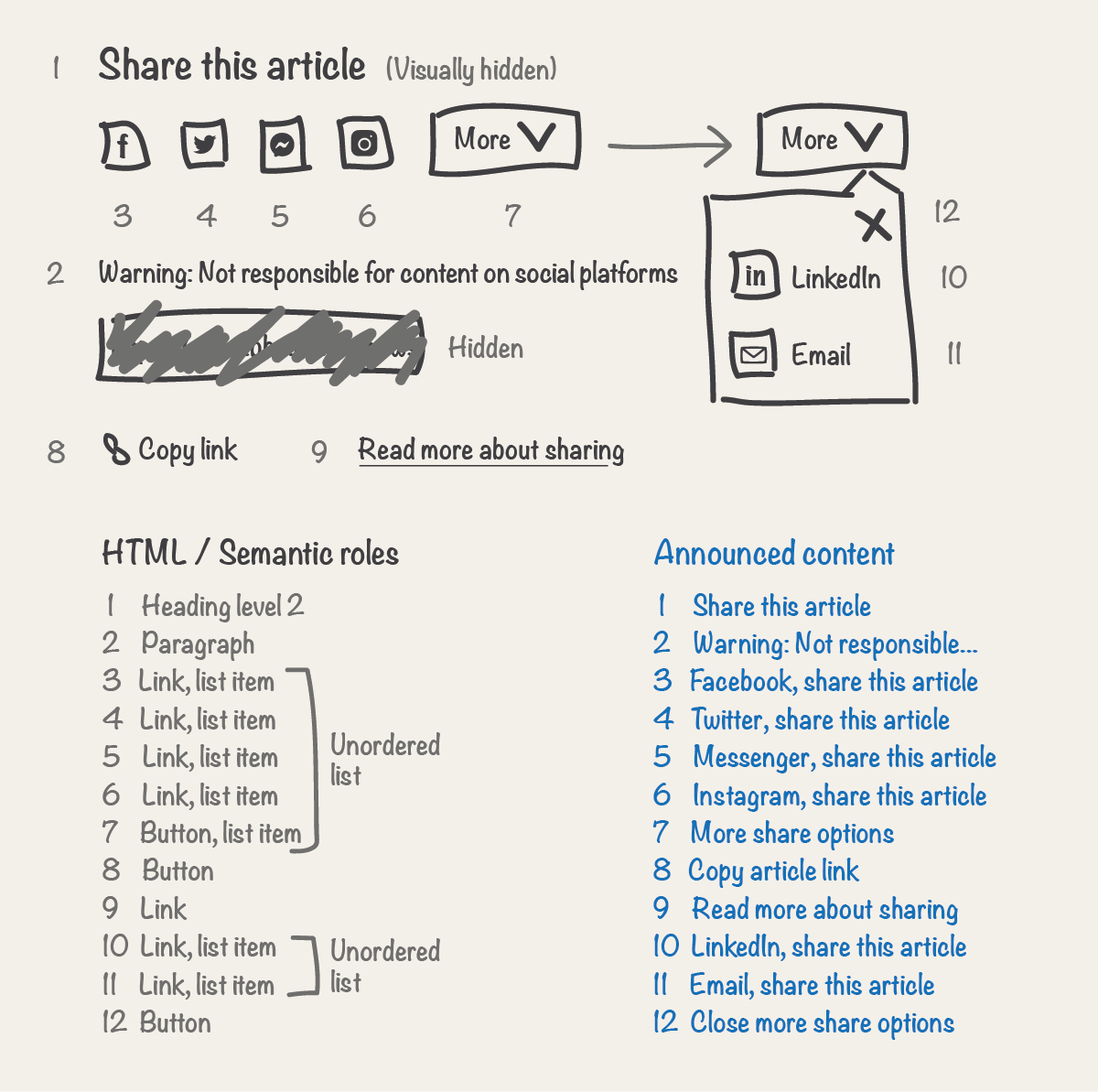 Improvements should be called upon sparingly. They are particularly relevant for in-page interactions and dynamic content. In our example, the 'More' button has a downwards arrow icon. This is a visual clue for sighted users. Giving a hint to the behaviour of the button upon activation, this is also known as an affordance. Could the non-visual UX be improved by providing a comparable affordance for the button behaviour?

Consider every element and document any desired UX improvements. Consider UX improvements such as additional semantic roles and affordances. Also document states for relevant actionable elements, changes to language and any additional functionality that would improve the UX. While you can, you do not need to define any ARIA specifics. Let an engineer consider the best technical approach, or collaborate. In our example, for the 'More' button, we’ll let users know if the content that the button controls is currently expanded or collapsed. 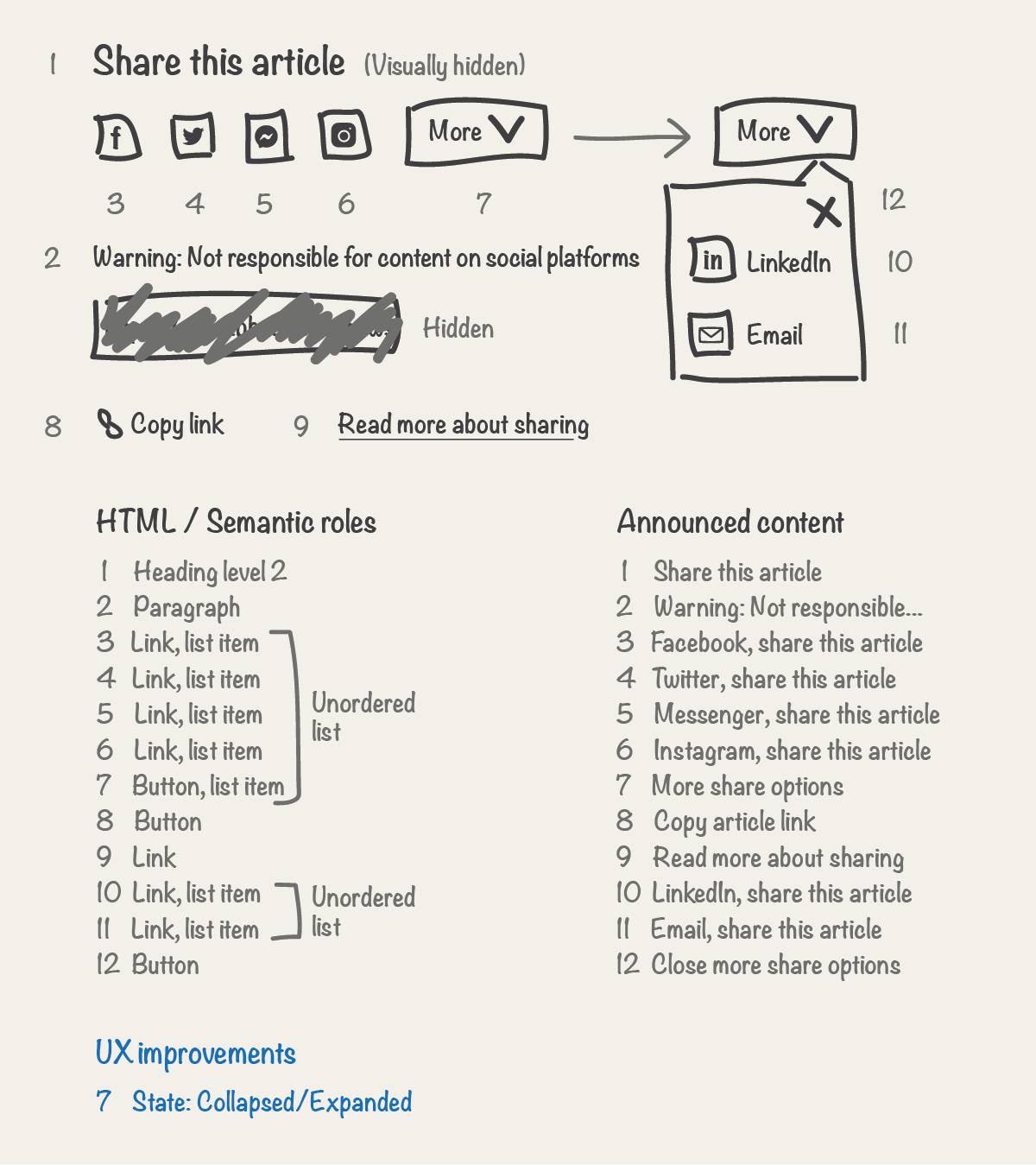 All actionable elements, such as links and buttons, are by default focusable with a screen reader and other assistive technologies such as switch devices. The order in which these elements can be focused and interacted with, for example with a keyboard by pressing the ‘TAB’ key, is important to consider. This order is referred to as the focus order or sometimes the tab order. All focusable elements should be visually displayed when they receive focus, and this order should follow a logical sequence. This is usually expected visually from left to right as you move through elements and down a page. Though there will be some exceptions to this. This order is by default defined by the content order.

Define the focus order by adding a directional line between actionable elements. Also document when focus needs to be moved on the users behalf after an in-page interaction. In our example, in addition to defining the focus order, we’ll also add some notes on focus movement for the 'Close' button upon activation. 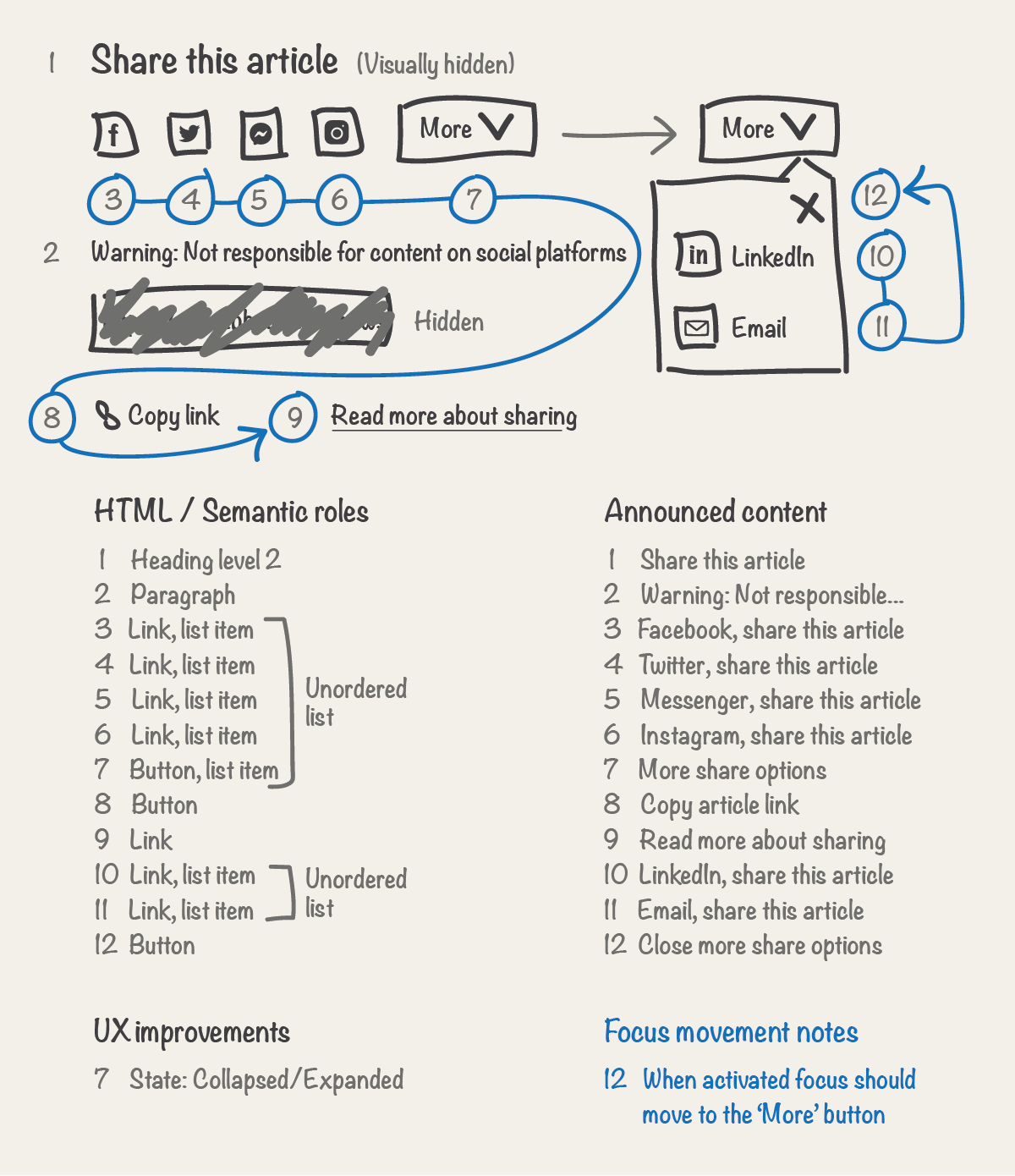 Typically we use colour or other styling to identify areas of web pages visually. For example, the BBC News website has a red block at the top. Visually this groups and identifies the page banner content. In the non-visual experience, you need another way to do this.

Note, landmarks are different to headings. Use the ‘show landmarks’ and ‘show headings’ buttons at the top of the ARIA landmarks examples page to see how. 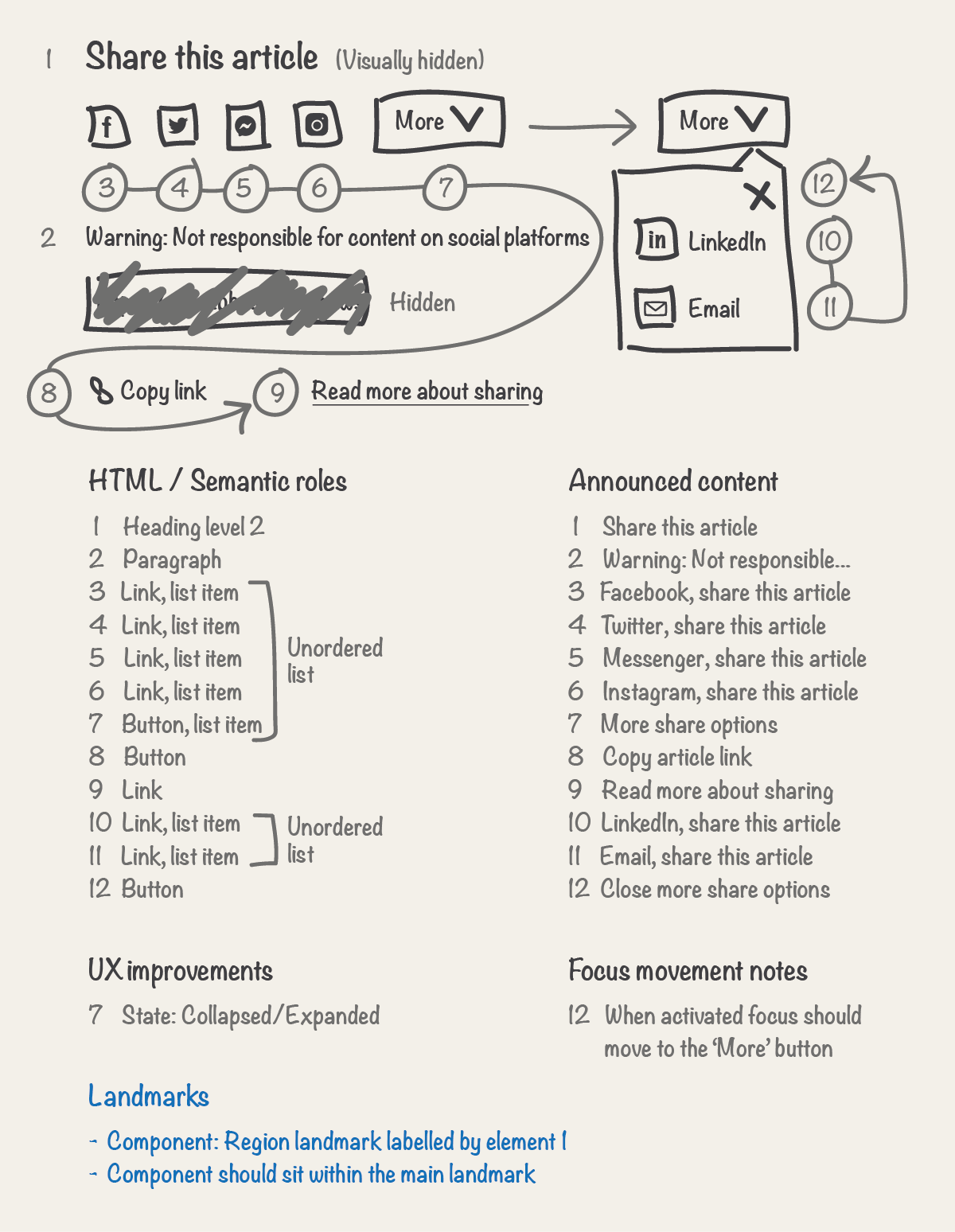 Validate the screen reader user experience by describing this to the reviewer as part of an accessibility design review.

When the screen reader UX has been documented an accessibility design review can take place. The next step in achieving an accessible component is writing accessibility acceptance criteria. For which, this documentation along with your visual will form a basis for. Your component is then ready for the development phase.

When the component has been developed and is ready for UX review, an accessibility swarm is your chance to review and sign off the screen reader UX. Designers are responsible for reviewing the experience for all users, not just the visual UX. Use this documentation to review against.

Reviewing the HTML could be one step in your review process. This should never replace reviewing the user experience with a screen reader and other assistive technologies. You can review the HTML by inspecting the code in the browser. Not sure how, ask an engineer to show you. Check that the HTML matches what you documented. You might also see a number of additional div or span elements. These elements are mainly used to achieve layout and visual styling with CSS.

You might be curious to know what the documented screen reader UX for our example ‘Share’ component looks like in HTML. Let's take a peek at the code…

If our example component was part of a website, when inspecting the code you might also expect to see a number of div and/or span elements in addition. Helping to achieve layout and visual styling with CSS.

Note, this guide takes one approach, there are other ways you could do this. Back to top